Rock Hudson’s Newlywed House in ‘Birdland’ Is For Sale

Since Her Death in January 2006, Rock’s Ex-Wife Has Been Outed, Too 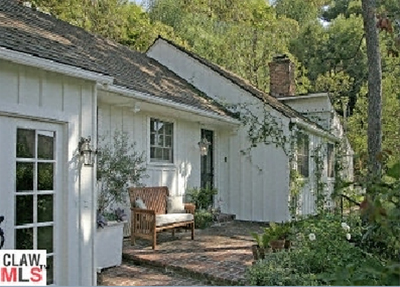 In 1954, after his breakthrough performance in “Magnificent Obsession,” Rock Hudson purchased his first home, a sweet California cottage at 9151 Warbler Place, in West Hollywood’s Birdland neighborhood above the Sunset Strip.

It is called Birdland because the streets are named for birds — Blue Jay Way, Sky Lark Lane, Oriole Lane, etc. It was, and still very much is, a good “starter” neighborhood for stars on the rise. (Madonna lived there in her phenom phase.)

The house is on the market now for $2 million:

A year or so after Hudson’s death (on October 2, 1985), Gates wrote a book, “My Husband, Rock Hudson,” in which she portrayed herself as too naive to know that she had married a gay man, and that the marriage fell apart after that shocking truth was revealed to her.

Hudson’s friends dispute this. In his autobiography, “Rock Hudson: His Story,” (which he wrote with Sara Davison, who finished it after his death), members of Hudson’s tightknit innner circle said Gates was fully aware that Rock had sex with men. It neither concerned nor alarmed her, they said, because Phyllis herself was gay.

After Phyllis Gates died on January 6, 2006, Robert Hofler, author of “The Man Who Invented Rock Hudson: The Pretty Boys and Dirty Deals of Henry Willson,” wrote in the Advocate that Rock Hudson’s contemporaries told him uniformly that Phyllis Gates was a lesbian:

[Every] person I met who knew Gates called her a lesbian. Not straight, not bisexual, but lesbian.

In that era in Hollywood, gay men and women entered into marriages of convenience more often than we’ll ever knew. Unfortunately, 50 years later, the stigma still exists in the entertainment business, and gay and bisexual stars still marry each other to protect their true identities from the public.

One day maybe the Birdland house where Rock Hudson and Phyllis Gates, a gay man and a lesbian, were faux newlyweds will become an emblem of liberation from all that.