This item appeared as a “Quick Take” in the Times yesterday: 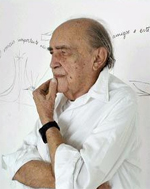 Niemeyer a month before his 103rd birthday

Brazilian architect Oscar Niemeyer celebrated his 103rd birthday Wednesday with the launch of a museum dedicated to his career.

The Oscar Niemeyer Foundation outside Rio de Janeiro will house exhibits about the legendary architect’s 70 years of work.

Niemeyer is responsible for more than 600 modernist projects around the world. They include the sweeping concrete structures that house Brazil’s government in the capital, Brasilia, and U.N. headquarters in New York.

Niemeyer is still working and has won numerous awards, including the Pritzker Architecture Prize in 1988.

There is a significant commerical building by Niemeyer right here in the Times’ backyard, of course. The former Beauty Pavilion, at 8760 Sunset Blvd. on the Sunset Strip, was commissioned by a famous plastic surgeon in the 1960s and is still in use as the headquarters for Mutato Muzika, a music production company that scores television shows and movies owned by Devo frontman Mark Mothersbaugh.

The building’s original white finish has been painted a traffic-stopping chartreuse, which could well be a tad too post-modern for the great modernist architect’s tastes.

The design was commissioned in the mid-1960s by Dr. Robert Frankyn, a plastic surgeon to the stars, who specialized in what he called “beauty parlor” surgery. Franklyn was also the author of a series of books on beauty: “The Art of Staying Young,” “A Doctor’s Quick Way to Achieve Lasting Beauty” and “Developing Bosom Beauty,” as well as a 1960 autobiography titled “Beauty Surgeon.”

In a profile in 1968, a reporter described him as “a fellow who has been labeled the Pygmalion of Hollywood, a kind of operating-room Rodin who works with scalpel and silicone instead of chisel and stone.”

Franklyn was a fixture in Hollywood social circles and was regularly mentioned in the gossip columns, especially in the early 1950s when he was married to Vanessa Brown, a minor movie star — she played the 11th Jane in the latter days of the “Tarzan” movie franchise.

The couple separated in 1956 and divorced in 1959. After Franklyn remarried. With his new wife, Wilma, whom he called “Willie,” he went into the horse racing business. The Franklyns bought a 60-acre ranch at 782 Portreo Road in Ventura County $1.5 million to assemble a stable of race horses that included Vaguely Noble, a British horse they purchased for a record-breaking $350,000. A headline in the British press read, “Hollywood Man Gets World’s Costliest Horse – It’s Dr. Beauty’s Beast.” Horse racing is not a sport for inexperienced amateurs, however, and Franklyn was both, and the endeavor soon fell apart.

In 1972, Dr. Franklyn, then 53 years old, made news again after an altercation at the ranch during which he shot and killed Miguel Angel Duque, a 50-year-old, long-time employee. Franklyn, who also shot himself in the arm during the altercation, was later acquitted on grounds he’d acted in self-defense.

Franklyn was spared the biggest scandal visited on his family, however. In December 1981, a year after he died after a heart attack, Wilma was wounded in a gun battle with officers from a joint task force of Los Angeles and Ventura county sheriffs’ deputies during a raid on the Portrero Road ranch. According to a report in the Times, Willie “opened fire with a handgun when officers entered her 40-room ranch house after tossing tear gas containers thorugh the windows of the three-story structure… Officers returned fire and a brief gunfight ensued in which only Franklyn was hit. [The bullet hit her in the abdomen.] She was taken to a hospital in nearby Westlake Village and, after six hours of surgery, was critical but expected to survive.” The officers seized two meth labs, about $100,000 worth of the drug as well as $50,000 worth of pot that was cut and drying in a shed.

Dr. Franklyn’s Beauty Pavilion opened on Nov. 19, 1967, and remained open through the 1970s. Prior to the Niemeyer building’s construction, however, the lot at 8760 Sunset Blvd. was occupied by a large residential building that, in the late 1920s, was the home of Hersee Moody Gross Carson, one of the most successful gold diggers of her era. In 1927, Hersee rushed to San Franciso to locate and marry George Carson, who’d made national news after the U.S. Supreme Court awarded him $20 million in damages after he sued several big mining operations on the claim that they’d failed to license a smelting process he’d invented.

The marriage got off to a rocky start and went downhill after that. Hersee found solace in spending George’s money. in 1932, at the height of the Depression, she built a three-story, 16-room castle a few blocks east on the Strip, on a hillside off of Sweetzer Ave. The house cost $500,000 then, which is about $7.1 million now.

Hersee Carson was best known for her charity, however. At Christmastime every year, she invited Chinese orphans to the house for a party and presents. Because she lived in a castle, the kids called her the “Fairy Lady.”

George divorced her in 1933 and died the next year. He’d written Hersee out of his will but she sued the estate. The settlement was not enough to cover the upkeep on the castle, however, and Hersee later decamped to Orange County, where she died at age 93, in 1972. The castle sat empty for a while. It was later used as a boarding house and later still converted back into a private home that was recently owned by Johnny Depp.

Over the last 20 years, Mark Mothersbaugh, the current owner of the former Beauty Pavilion, has built a successful career scoring movies and television shows, including the 1980s’ hit, “Pee Wee’s Playhouse.” Since then, he has scored many of Wes Anderson’s movies, including “Bottle Rocket,” “Rushmore,” “The Royal Tenenbaums” and “The Life Aquatic with Steve Zissou,” as well as a slew of kids’ television shows, including “Rugrats” and “Clifford the Big Red Dog.” Earlier this year, Devo released its first new album in a decade or more, titled “Something for Everybody.”

A casual search produces nothing about subsequent owners of the Niemeyer building after Dr. Franklyn’s death and before it was purchased by Mothersbaugh. Also uncertain is the building’s landmark status, historical, architectural or otherwise. It appears to be in good hands, at least for now.

More certain is the status of the only residence designed by Oscar Niemeyer in North America. According to Curbed LA, the home, located in Santa Monica, was recently restored.

The Art Newspaper has an interview with Niemeyer from last month, when he was still just 102.

Which prompts a question. What is it with longevity and architects? The Master, Frank Lloyd Wright, had a second career in his sixties and kept working through his eighties. Philip Johnson, the East Coast modernist, worked well into his nineties.

And LA’s own Frank Gehry is still going strong at 81.

Photo: You Are Here.