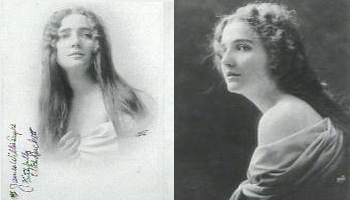 When Edith and her first husband Ken Robbins had a daughter, Anne Francis, on July 6, 1921, Edith asked Alla to be little Nancy’s godmother.

For the rest of Alla’s life, she and Edith exchanged letters and visited each other — Edith eventually settled in Chicago with her second husband, Loyal Davis, and Alla lived in her Hollywood mansion, the Garden of Alla, and later in New York. Many of Edith’s letters to Alla are in the Nazimova papers, which are housed at the Springer Opera House in Columbus, Ga., but Alla’s letters to Edith are either missing or have been destroyed.

There is a snapshot in the collection taken not long before Alla died of Nancy at around age 18 visiting Alla and Alla’s partner, Glesca Marshall, at the mansion in Hollywood, which by then had been converted to the Garden of Allah Hotel.

One last irony: Ronald Reagan lived at the Garden of Allah Hotel off and on during the rocky period at the end of his marriage to Jane Wyman in the late 1940s. The Garden was a wild place back then, and Reagan used to hold forth in the bar, and once said he recalled waking up next to young starlets in his villa at the Garden next to young starlets whose name he could not recall. After his divorce, he played the field but soon met Nancy and married her on March 4, 1952, after she had become pregnant. Their daughter Patty was born seven months later.