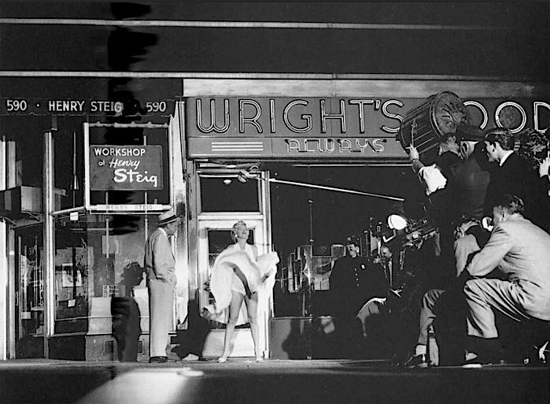 As soon as filming was complete, Marilyn flew back to Los Angeles and filed for divorce. It was granted within weeks, on Oct. 27, 1954. But that was not the end of the story. A week after the divorce was final, Joe’s jealousy drove him and his friend Frank Sinatra to follow Marilyn to an apartment in Hollywod where Joe believed she was visiting a lover. With two private eyes and several drunken friends, the broke the door down and entered the apartment — only to find they’d gone to the wrong place.

That incident, which came to be called the “Wrong Door Raid,” would become a cover story on Confidential Magazine in 1957, which would create an international scandal and humiliate both DiMaggio and Sinatra.

And it all started here, with the filming of what would become Marilyn Monroe’s signature pose.