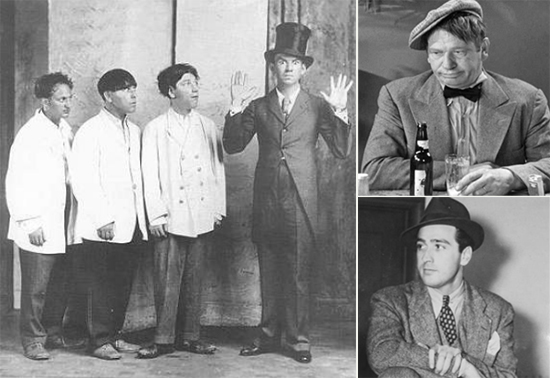 A few days before he passed away, Healy was involved in a drunken altercation at Cafe Trocadero on the Sunset Strip. Fleming asserts that Healy was attacked by three men — future James Bond producer Albert “Cubby” Broccoli; Pat DiCicco, a mob-adjacent figure who was Broccoli’s cousin as well as the former husband of Thelma Todd and the future husband of Gloria Vanderbilt; and Wallace Beery, a burly character actor who was one of MGM’s most popular stars — and that wounds from this beating caused him to die.

In The Fixers, Fleming says MGM covered up Wallace Beery’s role in Healy’s death, asserting that by 1937 Healy was down on his luck, all but bankrupt and drinking heavily. He had recently married a much younger woman, who, on Dec. 17, gave birth to his first child, a son. Three nights later — on Dec. 21, according to Fleming — Healy went out to celebrate, drinking alone in a series of bars before ending up at Cafe Trocadero, where he got into a row with Broccoli, DiCicco and Beery that proved to be fatal.

“After words were exchanged at the bar,” Fleming writes, “Beery punched Healy in the head in the presence of other patrons and was challenged by Healy to ‘step outside,’ where he said he’d beat each man ‘one at a time.’ But Broccoli had snuck outside, and when Healy walked through the door jumped him and held him while the other two beat Healy. They left him unconscious, sprawled in a pool of blood, and returned to the bar loudly toasting their victory.” Fleming says Healy was collected from the Trocadero parking lot and taken home, where he died the next day from “very apparent” head wounds.

The Times reported that Healy had gotten into a fight with Albert Broccoli, 29, whom the paper described as “a wealthy New Yorker.” However, the coroner’s examination ascribed Healy’s death, not to a fight, but to natural causes related to alcoholism. Fleming says the coroner’s cause of death was bogus — bought and paid for by MGM.

The next order of business for Mannix and Strickling, Fleming writes, was to get Wallace Beery out of Hollywood. According to Fleming, “Beery and his family left on a hastily arranged month-long trip to Europe. They left for New York later the next day. Studio photographers recorded their departure, smiling and waving as MGM’s biggest star left for a holiday vacation.”

With Beery safely out of town, Mannix and Strickling continued their mop-up by ensuring that the Trocadero staff, most of whom, Fleming says, “were already on Strickling’s payroll,” would remember nothing about Healy arguing with Beery, DiCicco and Broccoli. They also planted a story among the Trocadero’s staff that “survives to this day” — that it was “three drunk college boys” who had beaten Healy that night.

The Fixers was published in 2005, and since then the story that Ted Healy died after being beaten by Wallace Beery, Pat DiCicco and Cubby Broccoli has gained currency — in no small part because Fleming’s version of Healy’s death has been cited in Wikipedia entries for Ted Healy, the Trocadero and elsewhere.

I have been researching crime and scandals on the Sunset Strip since 2007, so when I came upon the story of Healy’s death, its connection to Cafe Trocadero caught my eye. From my perspective, it was potentially a twofer: a Sunset Strip crime and scandal all rolled up in one. (I had no clue who Ted Healy was, however.)

Later, after I’d read The Fixers, I did a quick delve into the Los Angeles Times’ contemporaneous coverage of Healy’s death. I found no real red flags — but assuming MGM had “fixed” the story, I took nothing for granted. What bugged me, though, was the human factor. It seems unlikely that a random selection of the Troc’s patrons and staff would have kept quiet about what they’d seen that night. Nothing spreads faster through Hollywood than celebrity-on-celebrity barroom brawls.

On the other hand, maybe the bar was relatively quiet on the evening of Dec. 21. Maybe Mannix and Strickling only had to pay off one or two people.  I checked and found that Dec. 21, 1937, was indeed a Tuesday, likely one of the slowest nights of the week, and with Christmas four days away, in one of the slowest weeks of the year.

Recently I saw a notice on Facebook that Larry Harnisch, the editor The Daily Mirror, a blog about Los Angeles history that focuses on crime, was researching Fleming’s account of Healy’s death and blogging about it on his site.

Harnisch is a copy editor for the Times and an expert on the Black Dahlia murder. I first encountered his work when he eviscerated Black Dahlia Avenger, Steve Hodel’s book about the murder of the Dahlia, whose real name was Elizabeth Short. In the book, Hodel, a retired LAPD detective, made the case that Short was murdered by his father, Dr. George Hodel.

For the past six weeks or so, Harnisch has been giving Fleming’s version of Healy’s death a similar airing. His reporting has also revealed how easy it is to publish unsubstantiated facts on Wikipedia. As I write this, he has presented his research on Healy’s death and the key players in it in 28 blog posts in two series: “The Death of Ted Healy” and “Wikipedia: Murder and Myth.”

The blogging format makes the narrative a bit hard to follow, but here is where to start:

A key error Harnisch uncovered was the fact that the altercation involving Healy did not occur on Tuesday, Dec. 21. It happened two nights earlier, on Sunday, Dec. 19. The Trocadero often had new-talent nights and other promotions on Sunday nights — just a few months earlier, for example, Mary Martin had been discovered during a Sunday night talent show there — so it’s as likely as not the bar was busy. If a sizable crowd had witnessed Wallace Beery hitting Ted Healy, or anyone, in the Trocadero’s bar that night, nothing, no amount of money, muscle or other persuasion, could have kept it quiet all these years.

The most damning counter-evidence Harnisch found, however, was that, contrary to Fleming’s account, Wallace Beery did not go to Europe in December 1937. “He couldn’t,” writes Harnisch. “He was filming ‘Madelon’ (released as ‘Port of Seven Seas’), as reported in The Times, Dec. 19, 1937.” Harnisch also found a news account of Beery’s participation in a live radio broadcast on Dec. 30, as well as an item noting that Beery’s wife, who was supposed to have accompanied him to Europe, was a guest at a luncheon on Jan. 7, 1938. Harnisch did find a notice in the Times on Jan. 24 announcing that the Beerys were planning to visit Europe in March.

Harnisch also examined Fleming’s sourcing on the incident, which includes The Three Stooges, by Jeff and Tom Forrester. The Forresters provided an eyewitness account by Sammy Wolfe, who had worked with Healy on stage years before. “Wallace Beery was sitting at the bar with Pat DiCicco,” Wolfe said, according to the Forresters. “Beery was making a lot of noise. Ted told Beery to be quiet. Beery said, ‘I won’t be quiet.’ It went back and forth. Then Beery got up and punched Ted right in the side of the head, right there in the bar. So Ted says, ‘Let’s go outside, and I’ll take care of both of you!’ I guess Beery and DiCicco went out into the parking lot, but there was already another guy out there. And he jumped Ted, and then the other two guys jumped in and beat him up.”

So what really happened that night? Harnisch provides a timeline based on various news accounts:

Sunday, Dec. 19, 1937: Healy is ill and spends most of the day in bed, according to manager Jack Marcus, who was with Healy for nearly all of the day. Marcus leaves that evening, telling bodyguard Hymie Marx “not to let Ted out of his sight.” (Examiner, Dec. 22, 1937)

Sometime after 11 p.m. Healy arrives at the Trocadero, but he is already so drunk that the management refuses to serve him liquor. (Examiner, Dec. 23, 1937)

Healy encounters Albert Broccoli, 29, who is standing at the bar. (Examiner, Dec. 23, 1937) Broccoli says he congratulated Healy as he entered. Healy asks an attendant “who is this fellow?” and punches Broccoli in the nose, then in the mouth and finally gives him a stiff uppercut “which nearly knocked me out,” Broccoli says.

Broccoli says he shoved Healy away because he didn’t want to hurt him and the attendants led Healy to an anteroom.

They come back and say Healy wants to see Broccoli. “I walked in and shook hands,” Broccoli says. “Then Ted went out and got in a taxicab and that’s the last I saw of him. As I recall, he wasn’t marked up when I last saw him.” (Examiner, Dec. 23, 1937)

Second version: After the Broccoli incident, Healy goes to a table at which two men and two women are seated. “One of the men objected to Healy’s remarks. Healy apparently was very drunk.” An attendant “observed the disturbance” and “led Healy out.” (Examiner, Dec. 25, 1937)

One of the men at the table follows. He “was gone for a few minutes” then returns and tells his companions that he “took a poke” at Healy and “knocked him down but he got back up smiling and we shook hands and said he was sorry for what happened and asked if we were still friends. I told him sure.” (Examiner, Dec. 25, 1937)

This individual is described in the Dec. 26, 1936, Los Angeles Examiner as “a well-known Hollywood figure.” This individual says: “I didn’t hurt him – just knocked him down, but another fellow IS BEATING HIM UP – GIVING HIM A WHALE OF A BEATING.” (Examiner, Dec. 25, 1937)

Later: Healy takes a cab to Ray Haller’s Seven Seas and borrows $50, Marcus says. [The Seven Seas was a favorite Hollywood watering hole in the 1930s but I haven’t been able to locate an address yet.]* (Examiner, Dec. 22, 1937)

Was the “well-known Hollywood figure” Wallace Beery? “Giving him a whale of beating” sure sounds like something he would say. And was the fellow whaling at Healy Pat DiCicco? We will probably never know.

For that reason, the suspicious circumstances around what happened that night make the death of Ted Healy yet another Hollywood legend.

*The address of the Seven Seas is 6904 Hollywood Blvd., directly opposite Grauman’s Chinese, according to an ad in the June 4, 1938, Times.

Five Degrees of Separation Between Alla Nazimova and Larry David