In the 1940s, Mickey Cohen’s headquarters were conveniently located on the corner lot next door 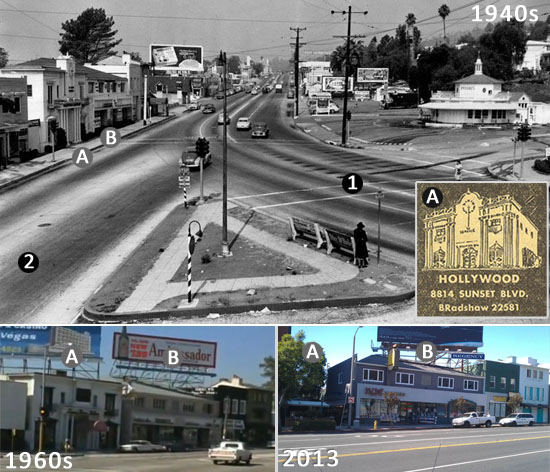 Top: (1) Sunset Blvd. looking west on the Sunset Strip at (2) Holloway Drive. (A) Mortuary building at 8814 Sunset Blvd., (B) Today’s Book Soup building. That’s the Dolores Drive-In to the right, on the future site of the Tower Records building. Inset: Ad for Utter-McKinley Mortuary from the 1940s.

It strains the imagination today but what is now the Sunset Strip was mostly a residential development in the 1920s. For example, the building at 8901 Sunset that is now the Whisky was originally a bank, and the building at 8852 Sunset that now houses the Viper Room — and was once home to the Melody Room, a famous jazz club, among a half dozen other nightclubs over the years — started life in the 1920s as Young’s Market.

Naturally, this thriving neighborhood in the 1920s would also need a mortuary. Originally called the O’Donnell Mortuary, it opened in the mid-1920s at 8814 Sunset, next door to the building that houses Book Soup today [map], at the confluence of Sunset, Holloway Drive and Horn Ave.

In 1936, the business was acquired by Utter-McKinley Mortuaries, a local chain. In November that year, the new owners announced they were “modernizing” the building, both inside and out, and that the exterior was being done over in the French Colonial style.

In 1947, Mickey Cohen acquired the building at 8800 Sunset, on the corner of Palm Drive and Holloway at Sunset. Given the business he was in, having a mortuary next door was convenient. Cohen had problems with the IRS, however, and sold out a few years later. The mortuary moved out in the late 1950s, and the building was acquired by a construction company that remodeled the building, presumably quite thoroughly, for its own offices.

Here are larger versions of the photos above: 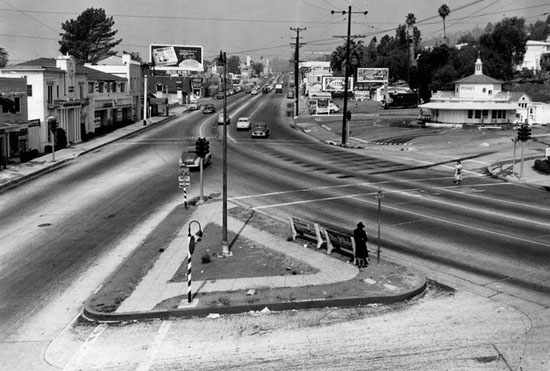 The confluence of Sunset Blvd. (right) and Holloway Drive (left) on the Strip. The Utter-McKinley Mortuary at 8814 fronts Sunset in the upper left. 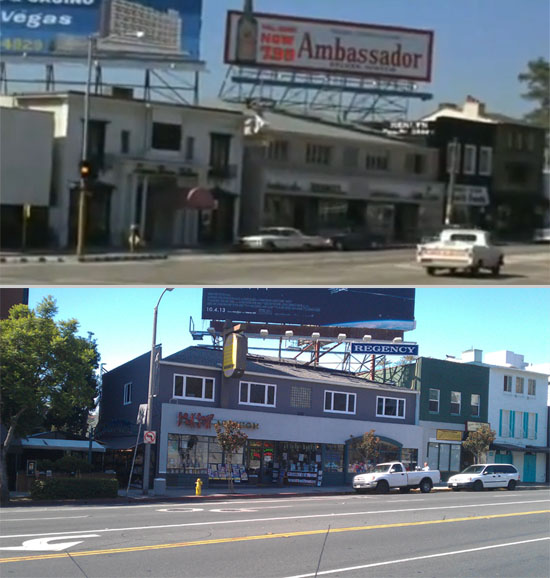 Top: 8814 Sunset as it appeared the 1960s when it was redeployed as business offices; bottom: the building was demolished, probably around 1983, and is now occupied by Book Soup’s newsstand