8150 Sunset, a 2.55-acre iconic property at the southwest corner of Sunset Blvd. and Crescent Heights Blvd., will be transformed into a dynamic mixed-use project that will respect the past and move Los Angeles into the future. The project will be comprised of approximately 110,000 sq. ft. of neighborhood serving retail and 249-mixed income rental apartment units that will serve to reclaim this important corner parcel as a gateway to the Hollywood area and the entrance to the famed Sunset Strip.

This is not the first tower proposed to be proposed for this site, however. In June 1930 — seven months into the Great Depression — Central Holding Corporation, which had only recently purchased the Garden of Allah Hotel, announced plans to build a 12-story “apartment hotel” tower — shown at left above — in the northeast corner of the property on land then being used as the hotel’s parking lot.

The current proposal even has a few superficial similarities to the design from 80 years ago. Both projects reorient the main focus of the development at an angle facing the northeast corner of the property, and the towers in both designs rise in a series of setbacks.

Here’s how the Garden of Allah Hotel appeared around 1930: 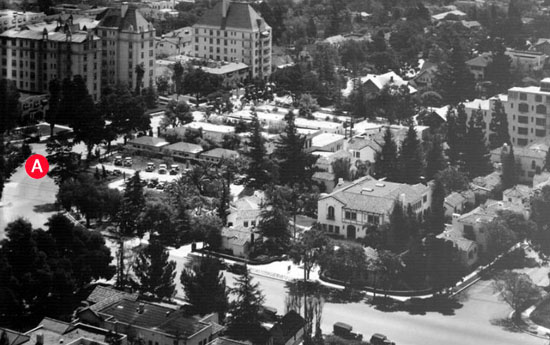 The Garden of Allah Hotel as it appeared around 1930, looking south-southeast; (A) The intersection of Crescent Heights Blvd. and Sunset Blvd.

Prior to its conversion to a hotel, the property had been an estate called Hayvenhurst that was built in 1913 by Crescent Heights (and, later, Encino) developer William H. Hay. In 1918, Broadway star Alla Nazimova acquired the estate from Hay when she arrived in Hollywood under contract with Metro Pictures, one of the precursor companies to MGM. Nazimova informally named the estate the Garden of Alla after herself, with a reference to the novel, The Garden of Allah, by Robert Smythe Hichens.

Nazimova suffered a reversal of fortune over the next few years, however. She had arrived in Hollywood as one of the industry’s highest-paid stars — at the start of her Metro contract, she was paid $13,000 per week, which would be approximately $200,000 a week in today’s money. But by 1926, she was on the brink of bankruptcy. She used the last of her funds to renovate the main house to serve as the hotel’s lobby, restaurant and bar, with guest rooms upstairs, and to build about 30 villas, comprised of one- and two-bedroom apartments. But Nazimova’s Garden of Alla Hotel, as it was called originally, proved to be a financial sinkhole. She soon sold the property back to William Hay, who, in 1929, sold it to Central Properties Corporation.

In the 1930s, the Garden of Allah Hotel became synonymous worldwide with bohemian Hollywood glamor. The roster of its famous guests, many of whom were long-term residents, included famous actors (Ronald Reagan, Humphrey Bogart, Ginger Rogers, Marlene Dietrich, Gloria Stuart, the Marx brothers and many others), writers (F. Scott Fitzgerald, Dorothy Parker, Lillian Hellman, Robert Benchley and Lucius Beebe) and musicians (Artie Shaw and Dimitri Shosatkovich, for example), as well as a celebrity mobster or two.

By the 1950s, a succession of owners had failed to upgrade the hotel and it had gone to seed. Lytton Savings & Loan purchased it in the late ’50s and immediately announced plans to clear the land to make way for its regional headquarters branch and a shopping center. The Garden of Allah was bulldozed into oblivion in late 1959. Early in 1960, construction began on the bank building and shopping center that are there now. 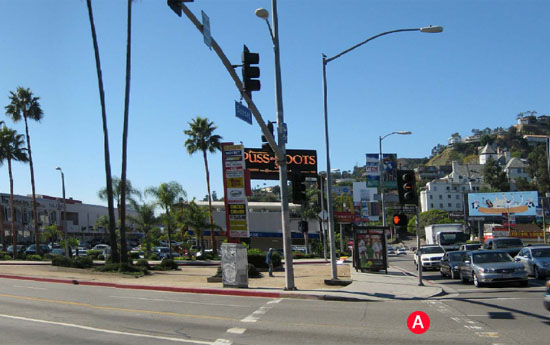 The intersection of Crescent Heights Blvd. and Sunset Blvd. (A) as it appears today

While the proposed 1930 tower was never built, it is possible to get a glimpse of what might have been. The Desmond Building on Wilshire Boulevard was designed by the same architectural firm, Gilbert-Stanley Underwood & Co. Inc., and has some of the decorative finishes and style shown in the tower rendering: 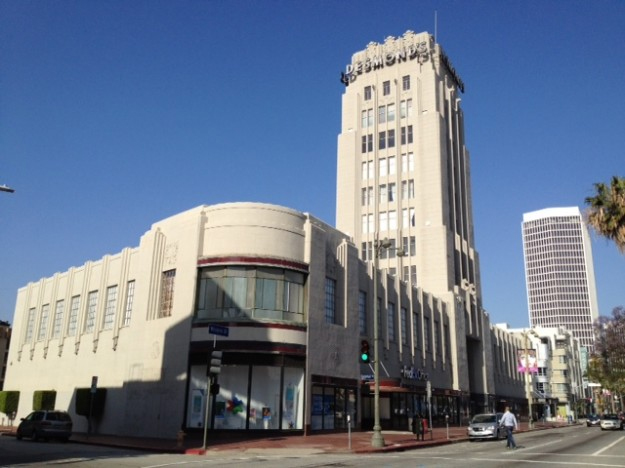 As it happens, the Desmond property is also being redeveloped now, with the addition of a seven-story apartment building set for construction on what had been a parking lot behind the building.