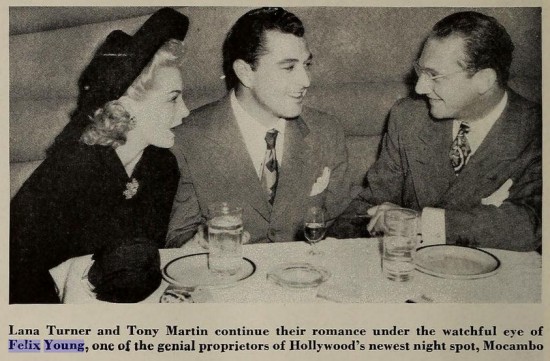 It’s unclear how Felix Young came to control Cafe Trocadero in 1939. Billy Wilkerson, The Hollywood Reporter publisher who’d opened the Troc in 1934, sold it to Nola Hahn in May 1938. Hahn had operated Club Continental, a lavishly appointed casino in Glendale (in the former site of a speakeasy called Airport Gardens). Asked recently about Hahn, Willy Wilkerson, Billy Wilkerson’s son, said, “Well, I know Nola Hahn. And, Nola Hahn definitely ran the Club Continental, at least the gambling. And, he definitely ran the gambling for my father’s establishments.” Wilkerson’s father’s establishments on the Strip included both Cafe Trocadero and Ciro’s.

Nola Hahn appears to have had financial problems in 1938 — a year in which reformers cleaned house on vice operations across the city — and by early 1939, Felix Young was in charge at Cafe Trocadero. In October, Young got into a dispute with the landlord, presumably the Montgomery family, owners of Sunset Plaza, doing business as Chateau Sunset Corporation.
On October 9, 1939, the Los Angeles Times reported:

Young suddenly closed the cafe Saturday morning and ordered secretaries to telephone his decision to 400 persons who had reservations for the evening.

Friction with the lessor, the Shatto [sic] Sunset Corp., was blamed by Young for his action.

“Until my contract is clarified to my satisfaction, the ‘Troc’ will remain dark,” he said.

During the lease negotiations, Young got into a physical altercation with a lawyer over legal fees and was fined $50 and sentenced to one year probation. According to the Times, the lawyer testified that Young “came to his office and was striking him and attempting to choke him when the office attaches interfered. The attorney testified that Young also threatened to have gangsters beat him.”

New owners reopened Cafe Trocadero very briefly in December — a party after the Hollywood premiere of “Gone With the Wind” was held there. But by May 1940, the furniture and fittings were auctioned off and the building remained dark until June 1943, when it reopened as a Latin music club called simply “The Trocadero.”

Felix Young’s next project was the launch of Mocambo in January 1941. Details are fuzzy here, too, but he apparently had a falling out with his partner, Charlie Morrison. Within months Felix was out, while Charlie Morrison continued to run Mocambo until his death in 1957.

Later in 1941, Felix Young resumed his quest to reopen Cafe Trocadero in a new space. Sources suggest he planned to purchase property on the Strip and build an entirely new building. That did not happen. Not long after the United States entered World War II, he leased a small space at the Beverly Hills end of the Strip (next to Adrian’s dress shop) that he called Little Troc. When he launched the club late in January 1942, his opening act was then-unknown Lena Horne. She became a star overnight, playing to packed houses — and signing with MGM — over the next four months.

Felix Young was born on Feb. 10, 1898, in New York City. He started his career producing musical reviews for the stage. By 1933, a review called “Felix Young’s Tattle Tales” opened in Hollywood. That same year, Harry Cohn, the head of Columbia Pictures, hired Young as a production supervisor.

But when Joe E. Lewis brought his unique, half-stewed mumbling style to the Sunset Strip, B.P. would be there leading the laughter. One evening I was driving down Sunset Boulevard, past the Trocadero, when I actually heard laughter so loud that I was sure it as my father’s. I parked my roadster and there he was, at a big ringside table with half a dozen of his studio cronies. One of these was [Felix Young,] a dandy with a breezy but polished style who endeared himself to B.P. by borrowing large sums of money from him with which to open newer and splashier cafes. Father finally thought it would be more economical to put him on the payroll as an associate producer. Like so many Hollywooders I knew, Felix could live in high style, with the choicest of wines, Eddie Schmidt suits like Father’s and opulent motorcars when he didn’t have a dollar in the bank.

Once Felix had called from the Lincoln Street jail, where he had been booked for fraud — Felix could sweet-talk a cardinal out of his red hat. Father had rushed down with the bail money. That must have been about the time Father decided to make Felix (Feel, we called him) a Paramount producer. B.P.’s pals (like Felix) talked about his great personal loyalties and his boundless generosity. To which Mother countered: “Why is that Ben is so brilliant — one of the three highest paid people in Hollywood — and still so full of insecurity? He seems to need people around him who tell what he wants to hear — instead of first-rate minds like Paul Bern and the other bright people Irving has around him.”

Father would fight back eloquently, without a trace of stammer. “Stop picking on Felix. As a mater of act, he’s a smart showman. But why don’t you mention young David [Selznick], Buddy Leighton, Lloyd Sheldon, who was a damn fine newspaperman? I have a better staff than Irving’s — and you want to know something? I’m making better pictures than Irving.”

The 1940 Census found Young living on the Strip at the Sunset Tower Apartments, where his rent was $135 a month, which in today’s dollars is still a very affordable $478 per month.

After Little Troc closed, Young appears to have given up on the Sunset Strip. In 1946, he was arrested in Beverly Hills — he was living at 10331 Wilshire Blvd. then — for passing worthless checks at the Bay Meadows racetrack in Northern California.

He returned to New York, where he managed high-end restaurants. He died in April 1975, in Herkimer, N.Y.