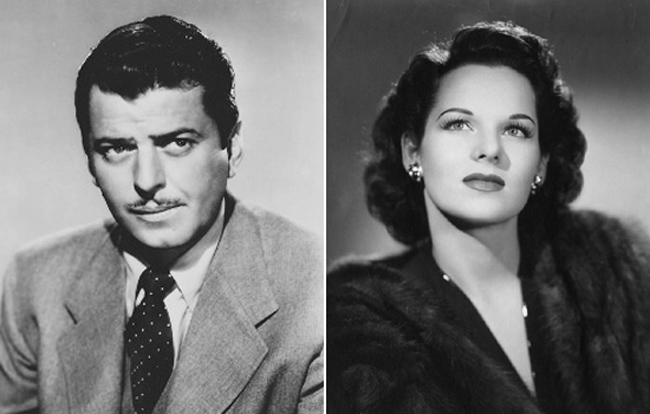 Here’s an item, interesting in retrospect, by Sylvia Kahn from the January 1942 edition of Modern Screen:

It’ll be a great for Hollywood when John Carroll takes plumpish, black-eyed Virginia Hill to be his blushing bride. If the pair do bounce to the altar, John will bring into the Movietown family the most fantastic personality it has known since Bogus Prince Romanoff was in his prime.

At 23, Virginia Hill is a woman of mystery. Her wealth is inestimable and untraceable, though it is surmised her three marriages (the first occurred when she was 14) might have had something to do with it. Her extravagances are notorious. At $1,000 evening gown [$16,000 today], the gem of Designer Irene’s fall collection, draped her body only three or four times before she gave it to a friend. Other gowns for which she pays from $100 to $400 are often discarded without being worn at all.

Her parties are reminiscent of something that went out with the Romans. Starting with two or three couples, Virginia frequently finds herself winding up the night hosting a mob of fifty. One evening she rented the Mocambo and its entire staff for a shindig. Conservative estimates say that little social cost her well over $3,000.

It’s always cash on the line for Virginia Hill. She travels with gobs of it tied in a rubber band. She’s never used a checkbook even to pay bills for her Chicago apartment, her New York and Hollywood hotel suites, automobile upkeep, maid and secretary.

There’s no denying, Husband Number Four will have to step fast to keep pace with the mad, exciting Miss Hill. But if anyone can do it, John Carroll is the boy. He’s not exactly a rest cure himself.

John Carroll was a popular actor who had appeared in over 25 films by January 1942 — his best-remembered performance, with John Wayne in “Flying Tigers,” would be released in October that year. Six-foot-four and ruggedly handsome — he was often compared to Clark Gable — he had a reputation at the time for playing the field.

He did not marry Virginia Hill, of course, and within a decade, she was no longer a “woman of mystery.” In June 1947, mob boss Bugsy Siegel was assassinated in the livig room of the house he shared with her in Beverly Hills — it has long been rumored that he and Hill had married after Siegel’s wife Esta divorced him in August 1946.

While her association with Siegel made her notorious, Virginia Hill’s appearance before the U.S. Senate’s Kefauver Committee investigating nationwide crime syndicates made her a household name. She admitted nothing during the hearing, which was broadcasted live across the country, but there is no doubt now that Virginia Hill was a powerfully connected mobster in her own right.

Five years after the Modern Screen item appeared, John Carroll married Lucille Ryman, a powerful woman in her own right. From 1941 to 1954, Ryman ran the talent department at MGM, where she worked directly with studio boss Louis B. Mayer, making her one of a very few women film executives of that era. She is credited with shepherding the careers of a number of young actresses, including Lana Turner, June Allyson and Janet Leigh. In 1949, Lucille and John befriended Marilyn Monroe at a time when her budding career had stalled and put her under a personal management contract. They even gave her free room and board in their apartment in the El Palacio Apartments just off the Sunset Strip. Within a year, with the Carrolls’ help, Monroe appeared in “The Asphalt Jungle,” delivering a performance that put her on the path to stardom.

The Carrolls’ most lasting legacy, however, is the Ryman-Carroll Arts Foundation and Los Angeles-based Ryman Arts, which honor the memory of Lucille’s brother, Herbert Ryman, an early Disney Imagineer.

Not long after the Kefauver hearings, Virginia Hill married ski instructor Hans Hauser. The couple emigrated to Europe in 1954 after she was indicted for tax evasion. In 1966, her body was found in a field near her home in Salzburg, Austria. She left a suicide note that said she was “fed up with life.” Her death was ruled a suicide by poison. 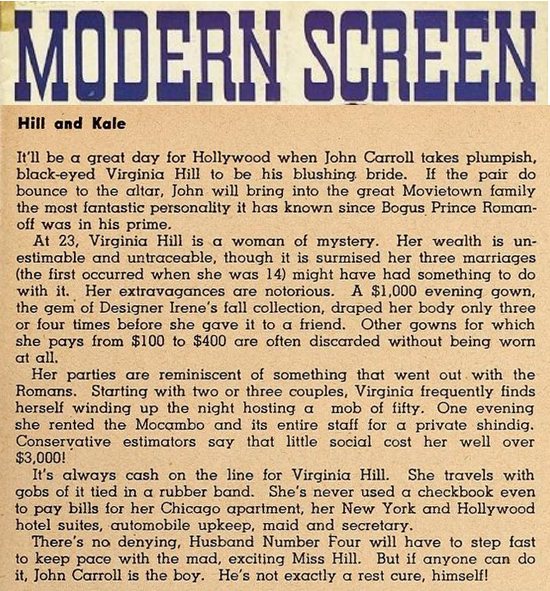