With detail on the Sunset Plaza area 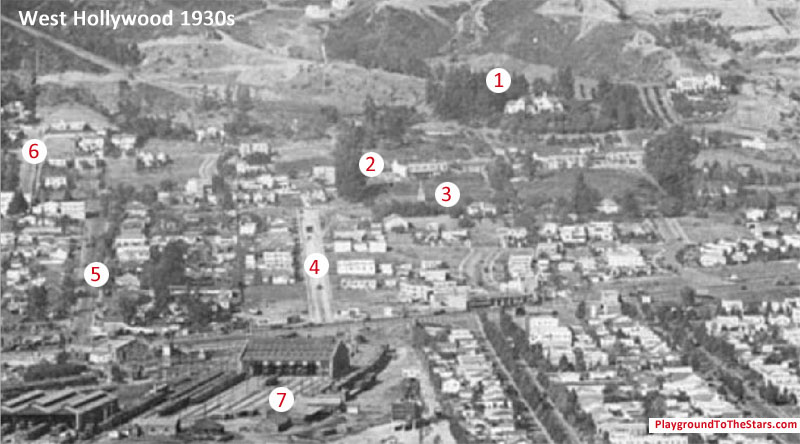 This is a section of an aerial photo of West Hollywood taken in the early 1930s that has been slightly enlarged to highlight noteworthy historic sites, including (1) the stately-looking home of Victor Ponet, an early major landowner in the area. In 1892, he purchased 280 acres in the hills above the village of Sherman (7), where he grew poinsettias and avocados. In 1906, Sunset Boulevard was extended westward from the Hollywood city limits to Ponet’s estate when land to the east of his property was developed into a residential neighborhood called Hacienda Park. That same year, Ponet donated land and funds to build St. Victor’s Catholic Church (3) on Holloway Drive. (St. Victor’s original woodframe building was replaced with its current building in the 1960s.) Within the next few years, the Sunset extension was graded all the way west to the Beverly Hills city limits, completing the 1.5 mile route that would become the Sunset Strip.

Ponet’s daughter, Gertrude, and her husband, Francis Montgomery, inherited the land upon Ponet’s death in 1914. In the early 1920s, Francis Montgomery created Sunset Plaza, a restaurant and retail development along the section of Sunset Boulevard that traversed the property. The back of a north-facing storefront row in Sunset Plaza (2) can be seen in the photo, below and to the left of the Ponet house. One of the early tenants in this building was the Russian Eagle cafe, a speakeasy popular with the movie crowd. On a busy day in 1928 an explosion rocked the cafe sending patrons, including boxer Jack Dempsey and his wife, Estelle Taylor, actor Richard Dix and Hollywood’s biggest star, Charlie Chaplin, diving for cover. Everyone escaped, although there were minor injuries, and that section of the building burned to rubble. The cause of the fire was determined to be arson — an attempted insurance scam by the proprietor of a gift shop next to the cafe.

Also of historical interest in the photo is an early view of Shoreham Heights (6), an upscale hillside development above Sunset — later home to Humphrey Bogart, Peter Lorre, Lena Horne and other big stars. The north-south street there is Horn Avenue. In the 1940s, the house at the lower right on Horn will be home to Cafe Gala, an early gay-friendly supper club that was popular with straight and gay stars, including Judy Garland, Tyrone Power, Marlene Dietrich, Dorothy Lamour, Janet Gaynor and many others. In 1982, Wolfgang Puck launched his world-famous restaurant, Spago, in the building, which has been vacant since 1997 when Puck moved Spago moved to Beverly Hills.

Victor Ponet’s house was torn down and replaced in 1936 with the Sunset Plaza Apartments. The Montgomery family still owns and operates Sunset Plaza, which remains a popular spot for drinking, dining and shopping. 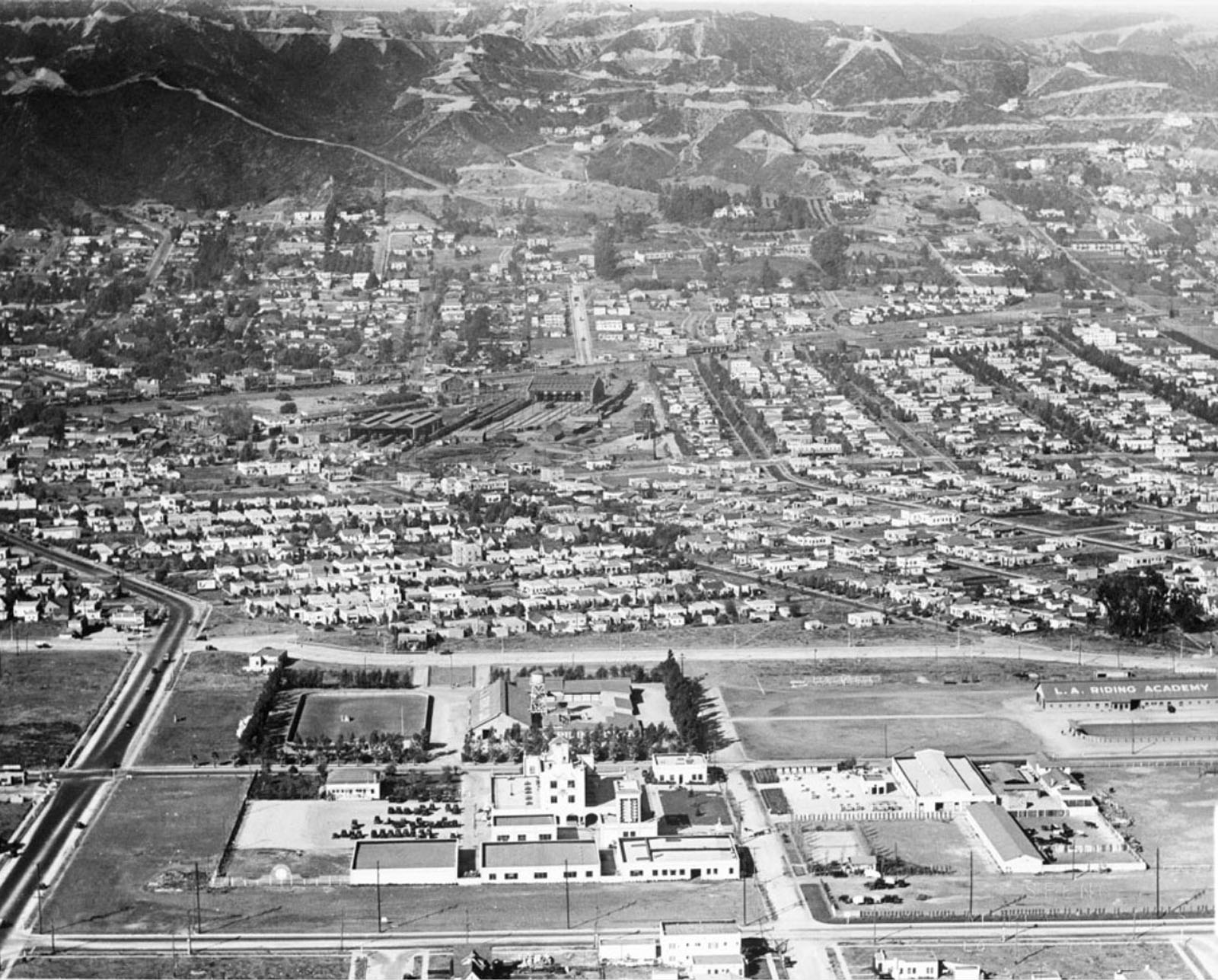 (Click to enlarge.) The large facility in the lower portion of the photo is the Los Angeles Riding Academy, which fronted what is now Beverly Boulevard on property now occupied by Cedars-Sinai Medical Center.

Correction: Additional research found that the Los Angeles Riding Academy (in the foreground) was sold in 1924, so obviously the photo was taken before then. I updated the headline to reflect the date change. – Jon, Sept. 11, 2020.