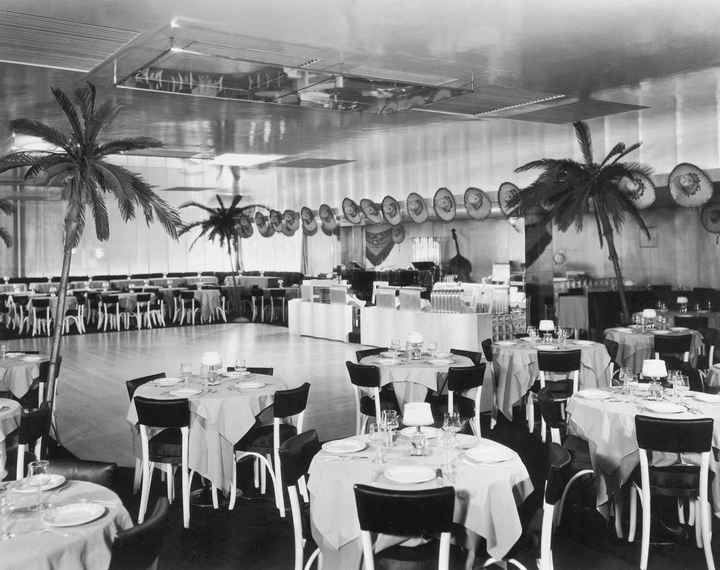 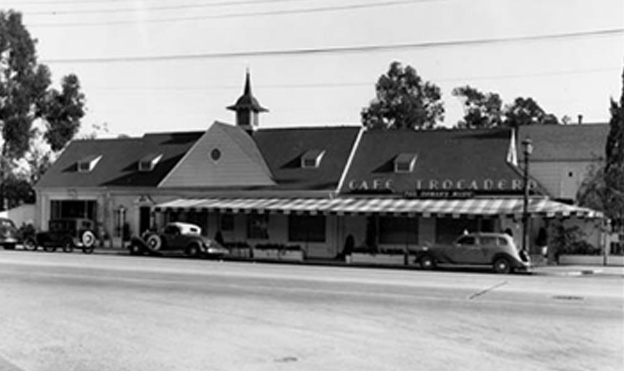 In 1934, [Hollywood Reporter publisher Billy Wilkerson] reopened a former roadhouse as the Cafe Trocadero, a smart French-themed late-night club at 8610 Sunset Blvd. Soon, agents began moving their offices to the Strip, where they were not only closer to their favorite tables, but also exempt from city business taxes, because that part of the street traversed unincorporated county territory.

Stars such as Lana Turner, Sonja Henie, Robert Taylor, Tyrone Power, Fred Astaire, Jean Harlow, Clark Gable, Bing Crosby and William Powell sat in the dining room with its painted panoramas of the Parisian skyline, drinking champagne, before taking to the dance floor as Nat King Cole sang or Harl Smith and his Continental Orchestra belted out a rumba.

Every Saturday night at the Troc, as it came to be known, the back room filled with the smoke from the cigars of Irving Thalberg, Darryl Zanuck, Carl Laemmle Jr., Joseph Shenck and Sam Goldwyn, who all had a penchant for high-stakes poker.

Would-be stars such as Judy Garland, Phil Silvers and Jackie Gleason got their starts by competing in “Amateur Hour” at the Troc on Sunday nights.

In less than three years, the Troc took in $3.8 million and was remodeled three times at a cost of $271,000. In 1937, Wilkerson sold it with the provisions that he and his family and guests could dine for free and that food and beverages would be delivered to his house, as well as to his mother’s home, upon request.

Here’s a description of the interior of Cafe Trocadero by Jim Heinmann in an article in the May 21, 2006, Los Angeles Times titled, “Those Hollywood nights; There was a time when stars of stage and screen enjoyed spending a night on the town rubbing shoulders with the city’s rank and file — and without a bodyguard in sight”:

The scene at the Cafe Trocadero, opened by Hollywood Reporter publisher Billy Wilkerson in 1934, gives us a taste of what Hollywood high life was all about. Housed in a stylish Colonial- inspired building at 8610 Sunset, it catered to continental tastes. Guests entered through a lobby surrounded by a frieze of Paris and a row of striped satin settees, handing their wraps to a pert coat- check girl before moving into the cream-and-gold main dining room.

Padded walls framed a mirror-like dance floor, which overlooked the grid of Hollywood. Xavier Cugat and his band, centered on a stage along the west wall, played all evening, and the menu was ’30s elegant: blini au caviar Romanoff, green turtle amontillado soup, alligator pear salad and chateaubriand.

Wandering down to the Cellar, the Troc’s more informal and clubby oak-paneled boite, you might run into Clark Gable and Carole Lombard, Bill Powell and Jean Harlow, chatting it up with Jimmy Stewart in an overstuffed booth. Cozying up to the copper-topped bar might be Joan Crawford and spouse Franchot Tone, sipping on the house specialty, the Trocadero Cooler.

Everyone was invited, but the cost of such an evening — around $18 in 1936, when the average hourly wage was around 25 cents — might set back the average Joe a couple of weeks’ pay. Less extravagant but more within reach, you could also just go to the Cellar, have drinks and $2 dinners for two and get out with only a $6 charge. But that was still three days’ pay.