A Bright and Guilty Place: Murder, Corruption, and L.A.’s Scandalous Coming of Age, by Richard Rayner 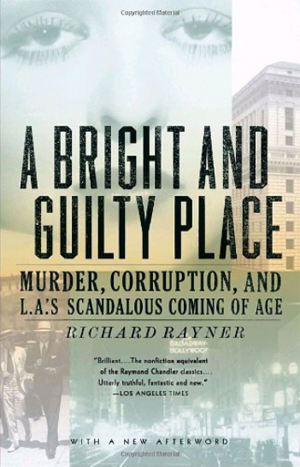 In the 1920s and ’30s, the city of Los Angeles was controlled by a group of powerful racketeers known informally as the “City Hall gang.” They were so infiltrated into civic institutions of Los Angeles that they profited from just about every activity or endeavor the city undertook. The racketeering networks, which were complex and confusing at the time, have only becomes slightly easier to understand with the passage of time.

In A Bright and Guilty Place: Murder, Corruption, and L.A.’s Scandalous Coming of Age, Richard Rayner leads us through these labyrinthine goings-on with the style and pace of a novel. Here’s how Rich Cohen described the book in his review for the Los Angeles Times:

In his brilliant new book, A Bright and Guilty Place, Richard Rayner has given us, finally and definitively, the nonfiction equivalent of the Raymond Chandler classics that fell like hammer blows in the middle of last century: Farewell, My Lovely, The Long Goodbye, The Big Sleep. Chandler turned fact, the criminal underworld of Depression-era Los Angeles, into fiction, and now Rayner, by a strange Didion-like alchemy, has turned fiction back into fact. Not to say he has dug up the story behind the story, as a reporter might profile the real white whale, but that he has run the world of Chandler through the machine a second time, the result being utterly truthful, fantastic and new.

He had a “pencil moustache and a gorgeous quality about him,” writes Rayner. “Reporters likened him to John Barrymore, to John Gilbert, and later to Clark Gable.” But by the end of the story, Clark, the golden boy, having fallen in with a bad crowd, finds himself prosecuted by his own office, on trial for double murder, the shooting deaths of local crime boss Charlie Crawford and newspaperman Herbert Spencer…

The background of this murder is the book’s real subject, Los Angeles in its defining moment, the late 1920s and early 1930s, which, according to Rayner, who writes an online column for The Times’ books section, is when the city’s “personality was fixed.”

… A Bright and Guilty Place is stuffed with incidents and alibis. As in the novels of Chandler, every two-bit walk-on gets his description and back story, the result being a landscape crowded horizon to horizon, as rushed and overpopulated as a marketplace. It is like one of those paintings by the photo-realists in which every face, even those deep in the background, is drawn in exaggerated detail. Like a baseball game in high def. Nothing is allowed to blur into distance. At times, this brings on a kind of vertigo, the heat of overstimulation, like the not unpleasant aura seen before the migraine.

The title, by the way, comes from Orson Welles: “Los Angeles — a bright and guilty place.”

For more info: A Bright and Guilty Place at Doubleday