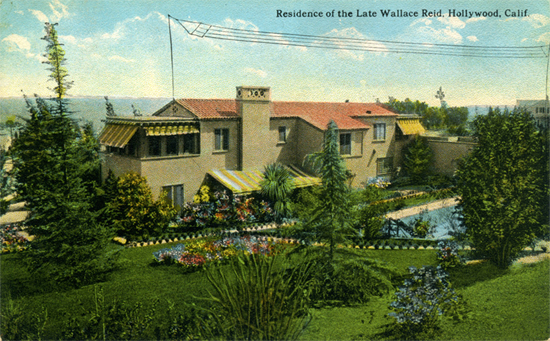 Wallace Reid and his wife, the former child star Dorothy Davenport, were a power couple in their day. Wally was a bona fide all-American–a Princeton graduate–who could play action roles as well as romantic leads. His box office draw earned him the title, “King of Paramount.” 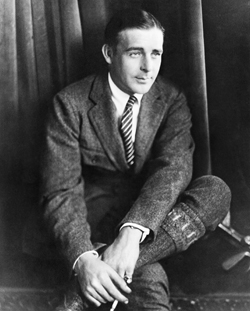 Dorothy got her start acting for D.W. Griffith and was a popular Universal player by age 17. They were both multi-talented–proficient as writers, directors and producers–and both came from multi-generational theatrical families. They met on the set of “His Only Son,” in 1912, and were married October 13, 1913.

In 1920, The Reids purchased two lots at 8327 DeLongpre Ave.[map], in Hacienda Park, as the neighborhood along the eastern section of the Strip was known originally, where they built this exotic Italianate mansion with a red tile roof, stunning views toward the ocean, and a swimming pool.

By the time the Reids had built this idyllic house, however, the seeds of Wally’s destruction had been sewn. Months earlier, he had been injured on location in Oregon for “The Valley of the Giants.” A doctor on the set administered morphine so that Wally could continue working and keep the production on schedule.

Later, back in Hollywood, the studio kept Wally supplied with drugs in order to maintain the viability of their biggest star. When that supply was cut off, he found others. At first, he hid his addiction to morphine from Dorothy, but she found out in 1921.

When he was between films, Dorothy checked Wally into a sanitarium for rehab. He apparently kicked the morphine habit in 1922, but his resistance was compromised. As his health worsened, Dorothy educated herself about drug abuse, having decided not to hush up Wally’s problems. She went public, and thereby, she found her own calling.

On January 18, 1923, Dorothy was with Wally in the sanitarium, holding him in her arms when he took his final breath. Afterwards, she went outside to the bank of waiting microphones from many nationwide radio networks. Composed and calm, she introduced herself to the radio audience in a firm, unflinching tone: “This is Mrs. Wallace Reid.”

Through no fault of my own, through circumstances that are tragic enough, God knows, I have been placed in a position to carry the banner in the drug war. It has been flung to me, as Wally’s wife, and for his sake and for the sake of the thousands like him who are suffering from this hideous disease, I cannot–I dare not lay it down.

And she didn’t. For the rest of her life, Dorothy Davenport devoted herself to educating the public about the realities of drug addiction, and she never stopped referring to herself as Mrs. Wallace Reid.