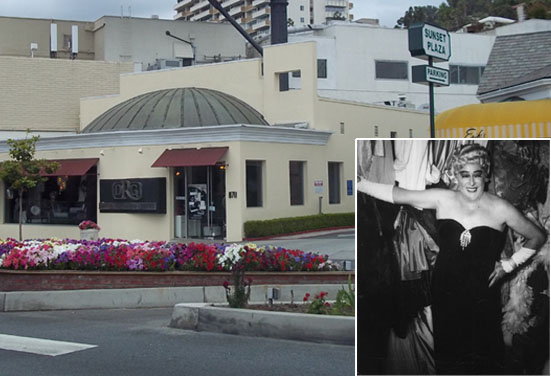 During World War II, thousands of soldiers, sailors and airmen on their way to the Pacific theater were granted their last stateside leaves in Los Angeles. Many of them headed out to the local bars to blow off steam, of course. But in June 1942, the Navy took the unusual action of placing about 30 bars and nightclubs across the city off limits to sailors.

“These taverns and bars are not safe or proper places for servicemen to patronize,” a Naval commander told the Times. “Firm handling is necessary to eliminate that undesirable fringe of the industry.” The precise nature of the unsafe and improper activities going on in these night spots was left unstated — but it must have been pretty bad if the Navy felt the need to protect sailors from it, especially since the Navy was sending these same men off to risk their lives in the Midway, Guadalcanal and other death traps in the Pacific.

There is one possible clue, however. Two of the clubs were on the Sunset Strip — Chez Boheme at 8950 Sunset Blvd. [map] and Cafe Internationale at 8711 Sunset Blvd. [map] — both of which were, using today’s term, “gay friendly.” (Gay bars as we know them today — clubs that cater to gay men or women — were a post-war phenomenon.)

The star attraction at Chez Boheme that summer was Rae Bourbon, a female impersonator and one of the last big stars of the Prohibition era “Pansy Craze.” Cafe Internationale, on the other hand, was owned and operated by Elmer and Tess Wheeler and catered to women. As the 1940 guidebook, “How to Sin in Hollywood” put it:

When Your Urge’s Mauve, [go to] the Café International on Sunset Boulevard. The location offered supper, drinks, and the ability to watch boy-girls who necked and sulked and little girl customers who… look like boys.

Like Chez Boheme, Cafe Internationale offered cross-dressing performers, but these singers were women dressed in male drag — two who were quite well-known then were billed as Tommy Williams and Jimmy Renard. According to historian Lillian Faderman, co-author with Stuart Timmons of Gay L.A.: A History of Sexual Outlaws, Power Politics and Lipstick Lesbians, Marlene Dietrich was in the crowd at Cafe Internationale when Tommy Williams performed one night.

As a result of the Navy ban, state authorities revoked the liquor licenses for Chez Boheme and Cafe Internationale. A new club, the Starlit Room, opened in the Chez Boheme space three years later, and Rae Bourbon returned there for a six-month run. Cafe Internationale owner Elmer Wheeler sued in 1942 to have the license reinstated, but he died that December and the club closed for good. His widow Tess opened another club later and became a fixture, along with her partner Sylvia Reiff (who was said to look like Radclyffe Hall), in the burgeoning Los Angeles lesbian scene after the war.