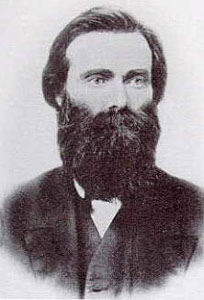 Henry Hancock, a New Hampshire-born, Harvard-trained lawyer and surveyor, arrived in Los Angeles in 1852, two years after California was admitted into the union. After working for the federal government to survey the area for several years, he went into private practice and acquired several large parcels of land, including, in 1860, Rancho La Brea, a 650-acre tract anchored along its southern boundary by the La Brea Tar Pits.

The rancho’s footprint today comprises the city of West Hollywood and the city of Los Angeles districts of Hollywood, Hancock Park, Museum Row and the La Brea Tar Pits.

During the Civil War, Henry Hancock briefly served as the commandant at Camp Drum, south of Los Angeles at Wilmington. Camp Drum held the distinction of being home to a few dozen camels that had been imported by the U.S. Army in 1856 and 1857 as part of an experiment to use them o use them for military transport across the western desert territories the United States had acquired as a result of the Mexican War.

In 1863, the Army ordered the camels moved to Benicia, four-hundred miles north in the Bay Area, where they were to be put up for auction. Major Hancock acquired several of the camels with the intention of starting a dromedary transport line between Los Angeles and St. Louis. Hancock commissioned the construction of an adobe cabin in the northwest corner of Rancho La Brea, in present-day West Hollywood, to house the camels and their driver, “Greek George” Caralambo. Hancock likely met Caralambo at Camp Drum where he was tending the camels.

Caralambo – Georgias (or Yiorgos) Xaralampo – a native of Turkey, had been brought over with the camels when they were shipped from the Mediterranean to the United States. He is likely the first non-native resident of West Hollywood, and his adobe cabin, which he apparently occupied by 1864, was likely the first dwelling built in the city. Its exact location is unknown. Some sources say it stood near today’s Kings Road and Santa Monica Boulevard. Other accounts place it a few blocks farther south, around present-day Melrose Place. This location seems more likely, given the relation of the cabin to the hills in the distance in the only surviving photo of it.

Henry Hancock’s plan to establish a dromedary transport line fell through not long after George and the camels moved to the adobe. Greek George is said to have set the camels free. They happily wandered off and were spotted foraging in the Hollywood Hills for the next 30 years.