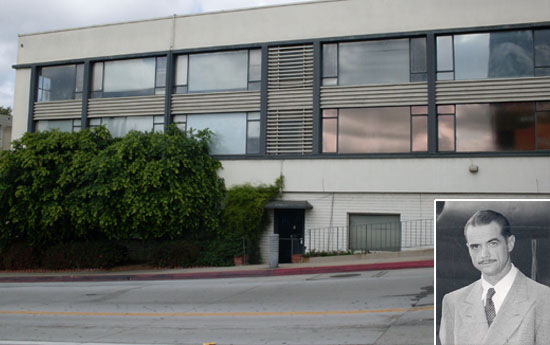 The building at 9012 Sunset that housed Nosseck's screening room as it appears today; inset: Howard Hughes in the 1950s

One night in the spring of 1958, Howard Hughes, mid-century America’s most famous and flamboyant millionaire, moved into Nosseck’s screening room in the basement of the building at 9102 Sunset Blvd. on the Strip [map]. He occupied the screening room, never venturing outside, for the rest of the summer, consuming nothing but milk, Hershey bars, pecans and Poland water. It is likely Hughes suffered from Obsessive-Compulsive Disorder, which is treatable today. Whatever the diagnosis might have been, the summer he spent at Nosseck’s was the first vivid presentment of the insanity that marked his final years. As the summer wound down, Hughes regained a semblance of himself and returned to his bungalow at the Beverly Hills Hotel.