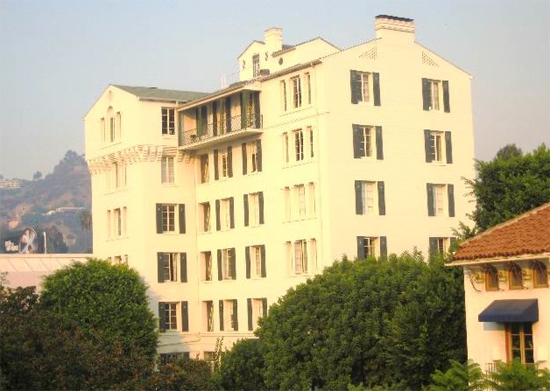 Built in 1930 and designed by noted Los Angeles architect Leland Bryant (Harper House, Savoy Plaza, Sunset Tower), the Colonial House has long been a home to celebrities. According to The Movieland Directory, some early Hollywood residents have included Clark Gable, Carol Lombard, Myrna Loy, Eddie Cantor, William Powell, and Norma Talmadge. Cary Grant, Bette Davis and Joan Blondell have also called the place home. Earlier this year even pop singer Katie Perry purchased a place in the Colonial House, continuing the building’s legacy for being a home for stars.

Bette Davis had many places around Los Angeles she called home at different points in her life. The Colonial House would be the last home she would live in. In the late 70s, according to the Roy Moseley memoir Bette Davis, the actor Roddy McDowall helped find her a place in Colonial House. Davis liked the apartment because it overlooked the La Ronda apartment house, where Bette and her mother first stayed when they arrived in California from New York. Bette wasn’t a movie star then, but just a young woman ready for her big break.

Bette’s apartment was on the fourth-floor and had large spacious rooms with twelve-foot high ceilings. She decorated the place with framed pictures nailed to the walls and with art books and family photographs on the tables. On the floor, on each side of a lattice doorway that led to the dining room, Bette placed her two Oscars which she won for Best Actress: one for Dangerous (1935) and another for Jezebel (1938).