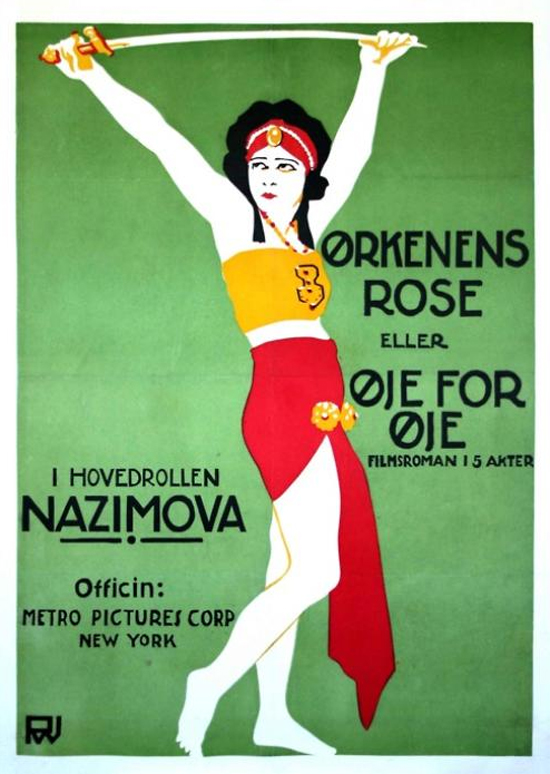 “Eye for Eye,” released on Dec. 22, 1918, was Alla Nazimova’s fourth film under her contract with Metro. It was based on the play L’Occident, by Henry Kistemaeckers, which had premiered in Paris on Nov. 4, 1913.

Hassouna (Alla Nazimova), the sheik’s daughter, helps a French soldier, Captain de Cadiere (Charles Bryant), escape from the Bedouins, and because of her betrayal is left to die in the desert. The girl is captured by a wandering tribe and sold to Rambert (Hardee Kirkland), a circus proprietor who has been looking for a dancer. Cadiere sees her at the circus and adopts her despite the protests of his wife Helene (Sally Crute). Hassouna, who loves Cadiere, consoles him after his wife elopes with another man, but her love turns to hatred when she learns from Taieb (E.L. Fernandez), her former suitor, that the captain was responsible for the death of her family. She plans to exact her revenge by ruining the reputation of Ensign Arnauld (Donald Gallaher), Cadiere’s beloved nephew, but learns in time that Taieb’s accusations were false and that her love for Cadiere is too great to do him harm.

Writing credits went to June Mathis and Albert Capellani. Capellani also shared directing credits with Nazimova. It had a runtime of 70 minutes.