A look back at key points in the Sunset Strip mobster’s life, by the numbers 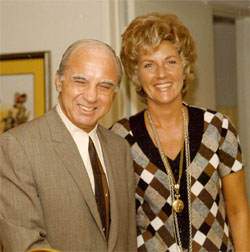 Number of one-on-one conversations between Shirley Temple and Mickey Cohen. The former child megastar ran into Cohen at Dave’s Blue Room on the Strip, 9039 Sunset Blvd. [map], in 1948. “We met at mid-stairway,” she recalled in her autobiography, “his chunky body pressed sideways facing me. As we stood fitted together like sardines, he said … how much he liked my films. In such close proximity to a genuine underworld insider, my imagination raced ahead but he was gone.”

In her biography of Cohen, Tereba reveals for the first time that a year after this encounter, Shirley Temple ran into Cohen again at a nightclub at the same address then called Sherry’s. In fact, when she left Sherry’s that night, the valet inadvertently mixed up her Cadillac with Cohen’s — a mistake Temple didn’t catch until she was several blocks away. Temple drove back to Sherry’s, exchanged Cohen’s car for her own and went home. Lucky for her she did. At around 4 a.m. the next morning, as Cohen and his party waited outside Sherry’s for the valets to bring their cars around, a pair of gunmen hiding across the street opened fire on them with shotguns. Cohen and several in his party were wounded. One of his bodyguards later died.

Number of assassination attempts against Cohen that occurred on the Sunset Strip. Nearly a year before the ambush at Sherry’s, gunmen entered Cohen’s office suite in his building at Sunset and Holloway [map] and opened fire. A bodyguard was killed but Mickey, who was washing his hands at the time, was unscathed.

Minimum number of times per hour Cohen washed his hands.

Number of times Cohen showered most days. Much of his time was consumed by his ritualistic cleanliness habit.

Number of sticks of dynamite in the bomb placed under Mickey Cohen’s Brentwood home on Feb. 6, 1950. Placed in the basement crawl space by the Dragna family, Cohen’s local rivals, the bomb inadvertently rolled under Cohen’s massive, concrete-encased safe, which deflected the blast and created a crater six feet deep and 20 feet wide.

Number of times Cohen was arrested for robbery, murder, assault, jaywalking, running a red light and once for using obscenities.

Number of times Cohen was convicted on any of those charges.

Number of times Cohen was indicted for tax evasion. Despite having been arrested hundreds of times, he served prison time only for income tax evasion — twice.

Cost to refurbish the casino fronted behind the Dincara Stock Farm that Cohen operated near the movie studios and aircraft factories in Burbank during World War II. That would be about $1.5 million today.

Number of months Cohen served – actually, three years, eight months, 16 days – on the first charge. He served over 10 years on the second.

Amount the organization of Billy Graham, allegedly paid Cohen to appear at a Graham revival in Madison Square Garden in 1957 – roughly $80,000 today.

Amount Cohen won in “Meyer Harris Cohen vs. the United States,” a first-of-its-kind lawsuit against the federal government. Cohen filed the suit after another prisoner at the penitentiary in Atlanta pummeled his head with a six-inch iron bar, leaving Cohen permanently disabled. The IRS immediately confiscated the award – worth nearly $1 million in today’s money — and applied it to his back taxes.

Number of years Mickey Cohen had lived before he died peacefully in his sleep after a long bout with stomach cancer.