Sunset Boulevard was extended west into the county strip in 1906 by developers of Hacienda Park, the Sunset Strip’s original neighborhood 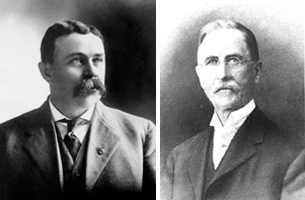 On April 29, 1906, a consortium of real-estate investors announced plans for Hacienda Park, a new residential development to be built on 140 acres of farmland in the “county strip” west of Hollywood. The first order of business would be grading an extension of Sunset Boulevard westward from the Hollywood city limits into the new development. This extension of Sunset Boulevard would be the mother road of the Sunset Strip.

Here is a portion of the Sunset Strip’s birth announcement from the April 29, 1906, Sunday Times:

Hollywood, for so long one of the favorite spots for homes in the foothills, has lately taken a great stride, and many beautiful residences have been built on spots formerly believed to be inaccessible. The increased facilities for street car service which the Los Angeles-Pacific Railway Company has promised, no doubt has much to do with this rapid settling, and real-estate men have been taxed to supply the demand for hight [sic], sightly locations where views and the sea breezes could be had. There has just been placed on the market a tract of 140 acres of land lying the in foothills, west of Laurel Cañon, between those beautiful homes of A.C. Harper and Victor Ponet, running north from Santa Monica Avenue, on which the Santa Monica car via Sherman runs.

This piece extends up the foothills embracing a couple of large cañons, and a fine slope to the southeast, and is most appropriately called Hacienda Park. It has been laid out into 50, 75, 100 and 200 feet front lots, also acreage and some very pretty romantic sites in and along the sides of the cañons. Sunset boulevard, an 80-foot street, is being extended through the land and through Mr. Ponet’s property, which will make a very attractive scenic drive along the foothills. This property belongs to a local syndicate and is being handled by C. Sumner & Co., who are laying out the streets more according to the contour of the land than is usual in this age of rectangular blocks and lots.

Using today’s landmarks, Hacienda Park was bounded by Sweetzer Avenue on the east, Santa Monica Boulevard at the south, La Cienega Boulevard (then called Newcomb Street) to the west and Hollywood Boulevard in the hills to the north.

A.C. Harper, who was elected mayor of Los Angeles that year, grew up at the foot of Laurel Canyon in a white, gingerbread mansion his father, C.F. Harper, had named Cioelo Vista but that was commonly known as Harper Ranch. (Mayor Harper would not complete his term. He resigned in 1909 rather than face a recall due to a scandal.)

Victor Ponet, a wealthy Belgian investor, bought a large parcel of land north of the village of Sherman in the 1890s. In the 1920s, his son-in-law, Francis Montgomery, developed Sunset Plaza [map], a commercial center midway along the Strip, which the Montgomery family still owns and operates today. Ponet also funded the construction of St. Victor’s Catholic Church on Holloway Drive [map] in 1906.

The southern, gently sloping section of Hacienda Park was popular with middle-class home buyers. The hillside properties were reserved for the well-to-do. In 1920, two top movie stars, W.S. Hart and Wallace Reid, built homes side by side on DeLongpre Avenue. (The Hart house is still standing [map].) Ultimately, however, the Hacienda Park “brand” was tarnished when developer John A. Evans was charged with embezzlement in December 1929. Charges were later dropped, but the damage to the development’s public image was done. The neighborhood’s original identity quickly faded from memory.

A few traces of Hacienda Park remain. Many houses built in the the period are intact, including some in the highly desirable section of the Hollywood Hills above the Strip. Another remnant is Hacienda Place, a block-long street running parallel to La Cienega Boulevard north of Holloway Drive.

The most prominent artifact from the period is the Piazza del Sol office building [map], a former residential building that opened in 1927 as the Hacienda Park Apartments. It was renamed the Coronet Apartments a few years later, which was still its name in the 1980s when it fell into ruins and was nearly destroyed by a massive fire. A news account about the fire mistakenly gave the building’s original name as the Hacienda Arms Apartments. The mistake stuck. The building’s original name is listed incorrectly in the National Register of Historic Buildings and in every reference to it in the press and on the web, including on Wikipedia.

The developers who commissioned the extension of Sunset Boulevard into the county strip back in 1906 could never have imagined that the road they laid out would one day be famous the world over, first as Hollywood’s playground and then as a rock ‘n roll mecca. The boulevard may be too commercialized today to be the “attractive scenic drive along the foothills” they envisioned, but now, 108 years later, it is taking on a new dimension. The Sunset Strip is becoming “historic.”