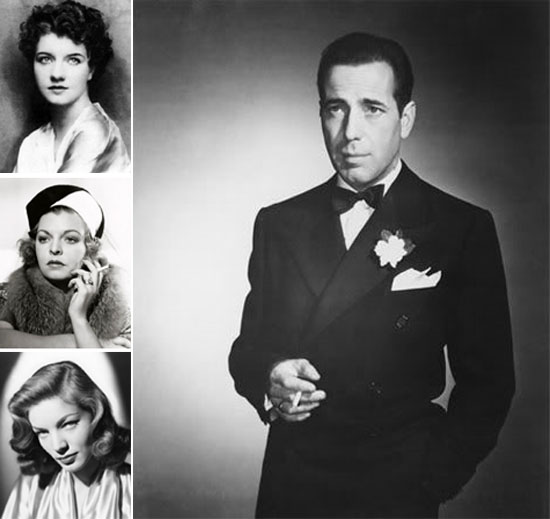 Humphrey Bogart lived on the Sunset Strip for 11 years, from 1935, when he arrived from New York to film “The Petrified Forest,” for Warner Bros., until in 1946, when he and wife number four, Lauren Bacall, moved from their honeymoon house on North Kings Road to Beverly Hills. During his years on the Strip, Bogart divorced twice and married twice. He lived in six places, including twice at the Garden of Allah Hotel.

Bogie’s first home in Hollywood was the Garden of Allah Hotel at 8152 Sunset Blvd. After a brief visit, his second wife, Mary Philips — he’d been married previously to another actress, Helen Menken — returned to New York because she had been cast in “A Touch of Brimstone” on Broadway. A few months later she starred as Cora, the murdering, adulterous waitress, in the original Broadway production of “The Postman Always Rings Twice.” After “Postman” closed, she returned to Los Angeles and moved with Bogie from the Garden of Allah into a Spanish-style rental on Horn Ave., a short, steep street that climbs the hill north of the Strip at Holloway Drive. (The landmark on Horn was the original Spago, which has been empty since Spago moved to Beverly Hills in 1997.)

It was nice on the hill above the Strip, with its views to the ocean. Bogart must have liked it up there. He lived in three different houses around Horn Ave. and Shoreham Drive. [map] over the next 10 years.

After Mary returned to New York to appear in another Broadway show, Bogart became reacquainted with Mayo Methot, a friend from his New York theatre days who had come to Hollywood in 1930. Bogie and Mayo had a lot in common. Both were actors, both were married (she to Percy Morgan, whose family owned the Cock ‘n Bull, a bar popular with celebrities on the Strip) — and they both liked to drink. After their respective divorces and the yearlong waiting period required by California law, Bogie and Mayo were married in August 1938.

As Bogart’s fame increased, so did Mayo’s paranoia that he was sleeping with his costars. She became so insanely jealous — needlessly so, by all accounts — of Ingrid Bergman during the filming of “Casablanca” that she stabbed Bogart in the back with a butcher knife. Unfortunately for Mayo, however, her paranoia would prove to be well-founded when he met Lauren Bacall on the set of “To Have and To Have Not” in 1944. Bogie, 44, fell in love with Bacall who was just turning 20.

During their courtship, Bogart left Mayo and moved back to the Garden of Allah, where Bacall could visit him in private. After they were married in 1945, Bogie and Bacall set up housekeeping on North Kings Road above the Strip but later moved to Beverly Hills before eventually settling in Holmby Hills.