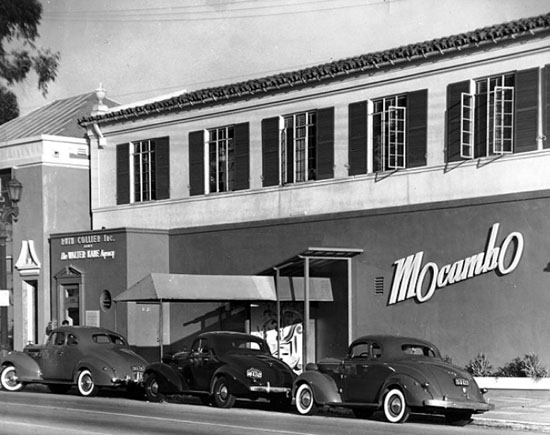 After Frank Sinatra left the Tommy Dorsey orchestra in 1943, he made his debut as a solo act at Mocambo. The club was also at the forefront of breaking the color line during the Jim Crow era. Eartha Kitt, Lena Horne and Ella Fitzgerald all played there in the 1940s and 1950s. Ella’s appearance in March 1955 was given a boost by her superstar fangirl, Marilyn Monroe. Marilyn promised Mocambo owner Charlie Morrison that if he would book Ella, she would make sure the booking received worldwide publicity. Marilyn was out of town when Ella opened, but True to her word, she packed the house with her celebrity friends, including Judy Garland and Frank Sinatra – and the press played it big. Ella later said that because of Marilyn’s support, after she played the Mocambo, “I never had to play a small jazz club again. She was an unusual woman — a little ahead of her times. And she didn’t know it.”