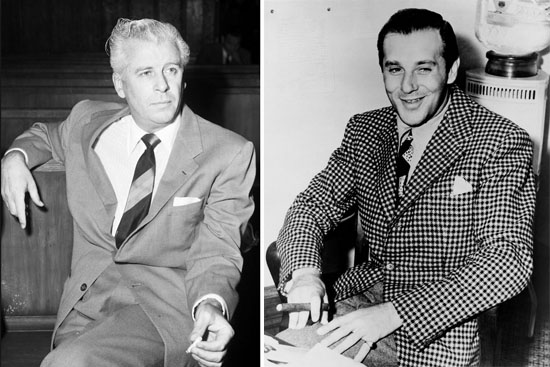 On May 25, 1944, Benjamin “Bugsy” Siegel, the infamous gangster, was arrested in the luxurious Sunset Tower Apartments building on the rather penny-ante charge of bookmaking. The vice detectives found Bugsy in the apartment of his associate, Allen Smiley, playing cards with Bugsy’s brother-in-law, Solly Solloway, and the A-list tough guy actor, George Raft. Detectives had been listening in on phone calls as Bugsy placed bets at tracks back east. A search of the apartment turned up betting slips bearing the names of Hollywood stars as well as a list of names said to be local bookies. Bugsy and Smiley were arrested, but Raft and Solloway were not charged.

Not long after the arrests, Allen Smiley moved down the street into the Sunset Plaza Apartments–it was there, in August 1944, that he was involved in a fight between his next door neighbor, the bandleader Tommy Dorsey, and action star Jon Hall that came to be known as the Battle of the Balcony.

During a hearing on the bookmaking charges, George Raft testified on behalf of Seigel and Smiley. Eventually, however, they both entered guilty pleas and were fined $250.