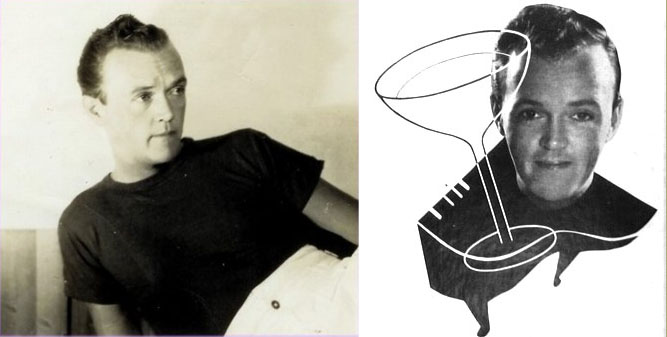 Bruz Fletcher was a society piano man in the 1930s who was known for lyrics that were laden with gay subtext, a style that would be known later as camp. He was bona fide society, the son of a wealthy family in Indianapolis, said to have been Boothe Tarkington’s model for “The Magnificent Ambersons.”

Bruz, popular with the sophisticated set, played a record-breaking four-year run at Club Bali, 8804 Sunset Blvd. [map]. The gig had been originally booked for just two weeks in 1935, but was so popular that it ran until early 1940. In 1938, Los Angeles Times columinst Hedda Hopper wrote that Bruz had the longest local run in nightclubs of anyone she could remember, and that was two years before it closed.

He was so closely associated with the nightspot that Club Bali was commonly referred to as “Bruz Fletcher’s.'” Waiters, wearing red sarongs, served Balinese cuisine to diners seated on coral red couches.

In addition to his recordings, Bruz Fletcher wrote two books and several plays. He is all but forgotten today, which is at least in part due to the fact that he committed suicide at the age of 34, in 1941. One of Bruz Fletcher’s records is included in Ernest Hemingway’s collection at his residence museum in Cuba.