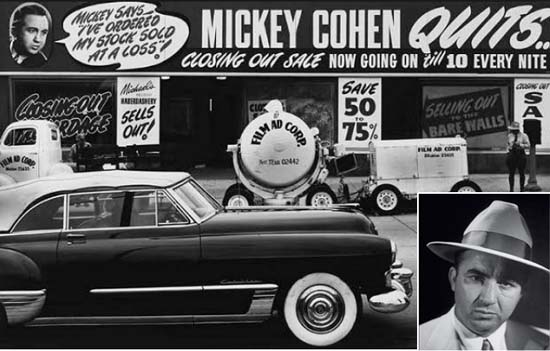 Mickey Cohen’s storefront building around 1951 after he decided to quit the haberdashery business during an IRS investigation into his business dealings; inset: Mickey Cohen

Mickey Cohen assumed  Benjamin “Bugsy” Siegel’s prime interests in Southern California after Siegel’s  assassination in June 1947. Later that year he moved the headquarters of his  underworld empire into a storefront building on the Strip at 8804 Sunset Blvd. [map]. He installed three of his legit businesses in the building’s street-level storefronts: Michael’s Haberdashery, Courtley Jewelers and a tailor’s shop.

Cohen had many enemies, of course, including rival local gangsters as well as officers inside the LAPD, a few of whom were corrupt and had been shaking him down for years. He was targeted for assassination twice during his years on the Strip. The first attack came in August 1948 when a gunmen entered his deluxe private office suite on a lower floor in the storefont building and opened fire. Cohen survived by hiding in the men’s room but one of his bodyguards, Hooky Rothman, had his head blown off.

The second attack came almost year later, in July 1949, when two men with shotguns opened fire from across the street when Mickey and his entourage were leaving Sherry’s night club on the Strip at 9039 Sunset Blvd. [map], around 4 a.m. Cohen and three others were wounded and required hospitalization but another bodyguard, Neddie Herbert, later died from his wounds. The gossip columnist Florabel Muir, a friend of Cohen, was slightly wounded by shotgun pelt that grazed her derriere.

Not long after the shotgun ambush at Sherry’s, Cohen’s home in Brentwood was bombed several times. But if these and other attacks were meant to drive Mickey Cohen out of business, they were efforts in futility. However, what did eventually drive him out was an investigation by the IRS, which forced him to sell his legitimate businesses and eventually resulted in conviction and sentencing to a lengthy term in federal prison.

No one was ever arrested in connection with any of the attacks on Mickey Cohen. Years later, however, Jimmy “The Weasel” Fratianno [Wiki] revealed that he had arranged the attempted hit in 1948 at the behest of Cohen’s gangster rival Jack Dragna — he also said that the triggerman who killed Hooky Rothman was longtime Dragna associate Frank “the Bomp” Bompensiero [Wiki]. But the source of the shotgun ambush outside Sherry’s in July 1949 along with the identities of the two gunmen remains a mystery. Many experts in mid-century Los Angeles crime history believe the most likely suspects were officials inside the LAPD.